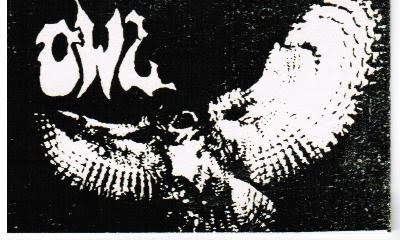 Three brothers wanted to make some heavy music and they did. They hail from Oakland, playing everything from Allman Brothers to Black Flag, and Bluecheer to Bathory.

Here's what somebody else said about Owl:
"The first time I saw Owl was at a bbq in Oakland. The air in the living room smelled like 8 year old boy sweat and brick weed. I thought: oh shit. This is awesome. Of course, there was Clint, where he usually should be, behind his drums. But there were these two other dudes. "His brothers!!", Shane screamed in my ear as a guitar started wailing some crazy ass heavy metal leads and I turned my head to see a little guy with long hair and the biggest smile on his face. Of course, by now I was shrouded and clouded; standing amazed at what was going on before me."
-Manslaughter at Illogical Contraption


A:
Slugtura{book I}
Bat Lord
Demon Ride
B:
Glaurung

Music to the Public...

Palantir
Oakland, California, United States
Magick Hermit is all about putting out visual and audible frequencies for the learned ears and eyes of those willing to venture into its confines... or, music, zines, art, films, etc. that need some inlet into society. That inlet is Magick Hermit however humble the inlet may be. If you want to place an order, Email: roaxellb@gamil.com